Remote Workers: An Analysis of the Future of the Workplace

There is a common myth among managers that employees who work from home are notoriously unproductive. The cartoonish vision of an employee sitting on their couch in their underwear would make any manager shudder, but recently remote work has begun to grow as a popular alternative to the traditional office setting. New research is even coming out about the merits of having your employees work remotely and the benefits it can have on their productivity. 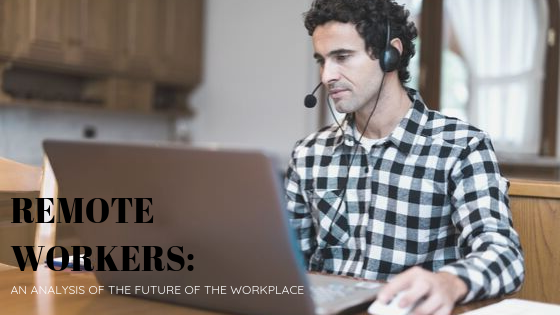 So, for today we will be dispelling the myths that surround remote work, and dive deep into the truth of offsite employees.

Let’s start by stating some facts about remote workers. A study conducted by Upwork in 2017 measured that 57.3 million Americans are freelancing and contribute approximately $1.4 trillion annually to the economy. In that same study, the researchers concluded that freelance workers are projected to be the majority of the U.S. workforce by 2027.

A popular two-year Stanford research study in 2014 found the benefits of employees that work from home. The study analyzed China’s largest travel agency, Ctrip, an organization of more than 16,000 employees. Employees were broken up into two groups, a control group (who continued to work at HQ) and randomly selected work-from-homers and were studied for two years.

The results of the study found a 13% improvement in performance from employees working from home, this trend was caused by employees working their maximum shift from home, whereas employees who commute to work either come in late, take long lunches, or leave early causing them to not work their full shift. Quit rates were also found to drop by 50% in the company from the increased worker engagement from working from home. And finally, the researchers found that when the program was rolled out to the whole company, productivity jumped to 26% when employees were given the choice to work from home.

Another unintended side effect of the increase of employees working from home for the business from the study was a reduction in HQ office spaces. $2,000 saved per employee on rent by reducing the office space to house the workers from home (Shanghai is a notoriously expensive city to work out of). Working from home also saves employees time, as the U.S. Census Bureau reported that the average, one-way commute time is 26.1 minutes. Roundtrip, five days a week, that adds up to 4.35 hours a week and over 200 hours (nine days) per year!

The Challenges of Remote Work

The above would suggest that all business should adopt a work-from-home model for their employees, but some complicated factors go into deciding if it would be right for a business.

The Association for Psychological Science conducted an evaluation of the efficacy of work from home programs. Their findings were that the effectiveness of a work-from-home program was dependent on the way the program is executed, the specific needs of the organization, the individual worker, and the circumstances. For example, in the Stanford study, Ctrip’s workers were at an advantage from working from home, as the workers’ jobs were sales related.

Although the number of studies on work-from-home programs is growing, the research is still limited in scope to the effectiveness of such programs in other fields of work. Currently, there is also a lack of any long-term studies into the productivity effects of work-from-home programs, as most of the studies have only taken place over a few months or years. The long-term effects of working from home on productivity, morale, and communication is still an unknown in the field.

Although the research is still limited on the effects of work-from-home programs, the stigma surrounding remote employees should be dispelled based on the current research. It’s time manger begin to embrace the remote workers march towards the future of how we work in the United States.

Need help managing remote workers? Having trouble keeping your remote workers engaged and productive? SolveHR offers custom-tailored strategic HR solutions to help you manage your remote workers wherever they are in the world. Contact us today to find out how we can help you build a better team, so you can focus on what matters—growing your business!

see all
Ask Our Experts

We are the human resources outsourcing company for small, medium and large-sized businesses.